Hugh Shedden, of Shedden Farms, Shipton by Beningbrough near York was awarded the Nuffield Scholarship by the Yorkshire Agricultural Society in 2017.

Hugh used his studies to look at improving practical efficiencies and cost-effectiveness to inform and improve British pig production.

He commented: “British pig farmers are amongst the best in the world but I believe we need to take advantage of the technological revolution, which is just starting to happen in the sector. For example, many farms operate a bed and breakfast production system and finish pigs on straw. I want to see if this can be adapted to become more efficient, and thus more profitable and if so, it could transform the industry.”

Problem prevention lay at the heart of his studies, for example, looking at the benefits of cameras installed in housing units to provide real time monitoring for an optimum environment and to spot any animal stress early, sound centres to check for potential health problems such as coughing, and sensors to monitor animal weights and growth.

He added: “I believe precision is going to be key for UK pig farmers. We are being challenged to reduce our antibiotic usage, reduce our environmental footprint and produce a premium product at a price the market will pay. We have to be able to get the most from our buildings, staff, nutrition and genetics and the correct use of precision technology can go a long way towards helping us achieve that goal. The potential is there, we just need to find the right tools. I believe using the technology of precision farming will enable us to achieve this.”

The business was established almost 50 years ago by Hugh’s father and uncle. Hugh now runs the pig operation with 1,150 sows predominantly aimed at the supermarket trade and just recently also via a wholesale butchers. The business mills and mixes its own pig feed with the majority of the cereals used coming from the farm’s arable operation. A growing element of the business is cleaning human grade beans for export which will be expanded to other cereals and products.

A strong supporter of the National Pig Association, the business employs nine people and recently Farrowing Stockperson, Jessica Graves won the 2016 NPA’s Trainee of the Year Award. The business is also a previous winner of the NPA’s Investor in Training Award.

During Hugh’s 12 month study, he looked at pig production in a number of countries, beginning with one of the industry’s major trade events, Eurotier in Hanover, Germany. Brazil was also on his list, which one of the world’s largest pig producers, and also World Pork Expo in Iowa. 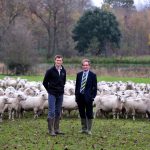