As part of our #Farm4Zero campaign Future Farmer Angus Gowthorpe, pictured above, explains how the approach he is taking on his farm is improving soil health year after year.

I farm 400 acres on a diverse range of soil types between York and Selby; 300 acres is arable and 100 acres is a mix of permanent and temporary grass. All crops are direct drilled and I do quite an amount of contract direct drilling.

My wife and I run a pedigree herd of Salers and sell breeding bulls and heifers as well as being active on the show circuit, including the Great Yorkshire Show. I was runner up in the Soil Farmer of the Year in 2018. The soil always comes first.

I have always been aware of the workability of the soils that we as a family have farmed, and tried to look after them, incorporating FYM and sewage cake and not damaging them by going on the land when the soil was saturated.

We have always had cattle on the farm and a fair proportion of the straw has been baled for bedding for the cattle.

In more recent years I have become far more aware of the health of the soils that I farm and was becoming aware of the declining quality of our soils. Seven years ago, I started farming using the principles of Regenerative Agriculture.

When I started out with the strip till drill I soon became aware that even though it was moving a fraction of the soil that we used to, that even this was too much disturbance.

After 2 years using this drill, I took the next step and swapped it for a no till disc drill. This cuts a narrow slot just 20mm wide, drops the seed into the slot, then closes it again, there is no cultivation and little to no disturbance. It can be very difficult to see where it has been!

Due to these measures the weed burden has dropped dramatically and crop health has improved resulting in reduced pesticide spend, whilst yields, after a few years of being static, have now started to rise.

Soil health is improving year on year, most markedly seen in a very high and diverse earthworm population and excellent organic matter levels for the different land types that I farm.

This year I am going to be using 25% less nitrogen and replacing this with biology, which will allow the applied nitrogen to be better utilised and result in healthier crops which will need less fungicide and less growth regulators.

I am currently implementing mob grazing of the cattle. This is splitting the fields into lanes and then high intensity grazing the cattle on a small area, known as a cell, moving them to a new cell each day. The grass then has over a month to recover before it is grazed once again for a single day.

Once I am satisfied that I have the fence lines set up correctly I will then plant trees along them, known as agroforestry, these will provide shelter for the cattle, increase the below and above ground biodiversity within the fields and provide a second income from the grass fields. 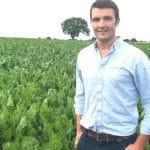 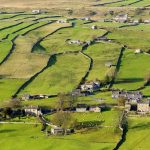 What I learnt from NFU Conference – Jessica MackintoshFuture Farmers