Events like #Fit2Farm are exactly how we instigate change – Stuart Roberts

“We have forgotten there is a question mark at the end of how are you,” the vice president of the National Farmers’ Union told the Future Farmers of Yorkshire’s #Fit2Farm event.

Stuart Roberts told an audience of more than 100 farming and industry professionals at Wednesday’s gathering at Pavilions of Harrogate that the farming community must always remember to look out for each other.

“Remember that question mark, because sometimes we are not alright and actually we need to look out for each other because this industry is probably about to go through some of the biggest changes any of us have ever seen.”

The Hertfordshire-based farmer opened up about his own struggle with dyslexia and how his wellbeing has suffered because of his difficulties reading and a previous battle to reduce his weight.

He urged people to look out for each other to spot signs when people are struggling.

“Farming is not just a sector of the economy, we are a rural community. Communities look after each other, look out for each other,” he said.

The senior NFU officeholder was also a guest at the talk about mental resilience given by New Zealand farmer Doug Avery at the Great Yorkshire Showground recently.

He said he was encouraged that the industry was now starting to talk about mental health – a subject which has traditionally been a taboo one – but that there was much more work to do.

“When it comes to mental health, we are starting to talk about it,” Mr Roberts said.

“I think we are giving each other permission to talk about it but actually I think there is still a very large stigma attached to the topic.

“These sorts of events, getting people together to start to talk about this is exactly how we start to change.”

The month-long #Fit2Farm campaign has highlighted how both mental and physical wellbeing is intrinsically linked to farm safety, and has sought to inspire farmers about how they can better nurture their own fitness to farm.

Every nine days, over the last five years, someone in the industry has died due to incidents on farms but Mr Roberts said he believed there were signs that this toll will fall.

See all the blogs and vlogs produced for the Future Farmers of Yorkshire’s #Fit2Farm campaign here.

A one stop resource to help you & your farm business stay strongFuture Farmers, Mental Health Week 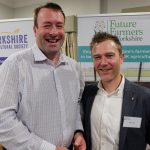 We will only improve farm safety by looking out for each otherFuture Farmers, Mental Health Week, Physical Fitness Week