Improving efficiency in the UK’s beef industry was the subject of the 2014 Nuffield scholarship awarded by the Yorkshire Agricultural Society.

Richard Pennock, deputy manager at Myton Hall Farms, Boroughbridge, York, was selected as the Society’s scholar and looked at a wide variety of farm systems during his study tour.  Myton Hall Farms was owned by Sir Ken Morrison who was Honorary President of Wm Morrison Supermarkets Plc.  Its activity included a fattening unit producing high-quality continental crossbred cattle for the UK beef market.

Richard is an active member of the Society’s Future Farmers of Yorkshire group and also of Boroughbridge Young Farmers Club.

Myton Hall Farms runs about 1,000 cattle; they are bought in at 15 to 18 months and finished in around 120 days on a maize silage and cereal-based diet. The enterprise also includes 1,100 acres of arable land and a flock of 300 Texel cross and mule ewes.

Richard commented in 2014: “I am delighted to have this opportunity and look forward to sharing my experiences. I am particularly interested in pioneering the concept of large scale commercial farming in which production is consumer-driven. I believe that small-scale farms selling products at farm shops and markets are in touch with consumer requirements, but this is often lost on larger farms which often don’t have the same consumer contact.”

Commending Richard, Sir Ken said: “Winning the scholarship is much to Richard’s credit. He has huge energy, drive and enthusiasm and I am sure he will use this opportunity to increase his knowledge and speed his personal development.  I am sure he will be a great ambassador for the British farming industry.” 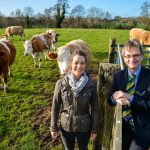