In collaboration with the Universities of Liverpool and Lancaster, Cranfield University is undertaking a two-year ‘Rurban Revolution’ project which looks at the potential of urban greening and food growing.

One of the aims of researchers is to compare the quality of soil, air and fresh produce on traditional farms versus urban farms, but in order to do so, they need samples of soil, air and crops from farms to analyse their antioxidant compounds, pollutants, heavy metals and other qualities.

Cranfield promises that the sampling will not disrupt the normal functioning of any participating farms.

Project leaders said ‘Rurbanisation’ is a vision for radically increasing the amount of space devoted to greenery and growing food in cities. They propose that the concept could help address serious food concerns by:

– helping to reconnect people with food and nature, reducing stress and increasing access to fruit and vegetables;

– increasing urban food production, reducing the amount of food that needs to be grown outside of cities, making space for nature inside and outside cities, and shortening supply chains;

– and, increasing domestic production and the supply of fruit and vegetables that are key to the nation’s health.

Cranfield highlighted how, in the past, food system shocks have created rapid rises in urban growing, and have led to individuals and communities taking more responsibility for growing their own food, for example the ‘Dig for Victory’ campaign which was launched during the Second World War by the British Ministry of Agriculture.

Academics behind this new project want to explore whether ‘rurbanisation’ – or ruralising urban spaces – could act as a pre-emptive measure for increasing food security.

Click here for more information about the project and for details on how to contribute soil samples. Alternatively, email natalia.falagan@cranfield.ac.uk

Read more posts by The Yorkshire Food, Farming & Rural Network here. The network is made up of local groups representing different areas of England, to identify and feedback local issues and concerns straight to the heart of Government, in order to make policies more rural-friendly. 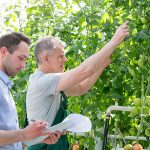 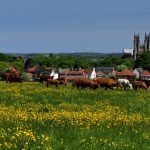