In this blog post, Future Farmer of Yorkshire Duncan Berkshire explains the deep crisis that continues to affect pig farming across the country.

It cannot have escaped the attentions of many people over the last 10 months that we have a major crisis within the UK pig sector.

There have been reports all over many different forms of the media following on from an informative protest that occurred at the Conservative Party conference in October.

We are at a huge crossroads for UK pork production and the next few months will determine if we have any pig farms in the UK at all.

That sounds ridiculous, I hear you say, but this is a serious point.

Pig production in this country has never received any subsidies and pig farmers have therefore grown to be lean and efficient in their costs.

Government, retailers and Red Tractor have continued to push policies to improve the health and welfare of the pigs produced in the UK and our standards are well above those across most of Europe, and a light year ahead of the rest of the world.

The British pig farmer has taken all of these on board: adapted, invested, trained and pushed forwards to make our pork production and standards something we should be proud of and want to support.

Yet the challenges through last year of Covid-19, Brexit workforce issues, and cheap pork for import meant that the true colours of our food supply chain was laid bare to all.

A race to the bottom?

We are all told that the consumer wants to support high welfare, British product, yet what the retailers and processors will put on the shelves is often the one that generates most profit.

If this is from a country that adheres to standards that would be illegal in the UK then so be it.

That meant that we had the absolutely unacceptable situation over the last 6 months where retailer shelves had ‘illegal to produce in the UK’ pork products for sale while the contracts for UK pig farmers were ripped up and the pigs were not accepted by the supply chain.

‘Production cannot simply be turned off’

Pigs are great animals to work with. I should know since I have worked with them every day for the last 18 years since I left vet school!

They are also big animals that grow quickly, and they are difficult to slow down.

A bacon size pig continues to grow at over 1kg per day, while eating more than 3kg of food. That’s one big food bill.

We also have a lot of pigs in the pipeline since it is around 10 months from when a sow starts her pregnancy until those pigs are sent off farm into the supply chain.

There is no tap to ‘turn off’. That meant we had, as a sector, the incredibly difficult decision to make, where pigs had to be culled on farm as space in pens, buildings and paddocks ran out.

The vast majority of the retailers and processors unfortunately did not come to the assistance of the pig farmers, despite the fact that the UK as a whole is around 45% self-sufficient for pork.

There should be ample capacity to avoid this having to be the end result.

In a modern society, where the consumer actively wants to support buying British food, I am at a loss as to why this was allowed to occur.

We have engaged with Defra and the Government from the very start of this crisis and, although there is starting to be some progress at resolving the issues, the pace of change is dreadfully slow.

‘Costs of conflict are adding up’

Agriculture is in an even more widespread desperate state presently with the impacts of the Russian conflict with Ukraine.

Costs across the board have rocketed and this is continuing to have its impact in the pig sector.

How our Government continues to state that we are not on the brink of a food security catastrophe is astonishing.

Every country in Europe has acknowledged this and is making attempts to mitigate the impacts over the coming years.

Defra states that there will be minimal direct impact and the shelves are still full.

This is where my worries coalesce around the sector I work in where there has been no profit for reinvestment for over 18 months now.

You read that correctly. Pig farmers are losing £61 per pig they send off farm.

No business can stand that for any protracted period of time and many pig farms will shut.

We know that 11% of pig farms are already closing and we will not have a British pig sector to support at all if we are not careful.

The Government have their heads in the sand since they believe they can continue to import our food for the retailer shelves, but at what cost?

This will result in us supporting poorer standards elsewhere around the world where we have no influence on improving them. As we lose critical mass in all areas of food production, costs will also rise to the consumer.

The Government’s promised ‘cheaper food’ policy will be short lived and only gives us less control in the medium/long term, which is very short sighted.

So, what can we actively do?

Supporting UK agriculture by consciously buying British and asking if you’re unsure is a great start.

Just because you buy your meat from a butcher does not guarantee it is British, so ask them and find out more about your food’s provenance.

MPs and Government need to wake up to the food shortages that are already visible on the horizon.

Make sure they are aware of this and push them hard to guarantee fairness in both standards and pricing within the UK supply chain.

They know that the electorate will revolt if they have empty stomachs and their current stance is leading inevitably to that outcome.

It’s a small part we can play, but make your voice heard and hopefully we can make sure that we have UK farms producing food, and particularly pigs, for many decades to come.

Read: Stepping back has helped me forge ahead – Angela Kirkwood 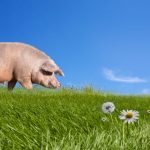 Stepping back has helped me forge ahead – Angela KirkwoodFuture Farmers 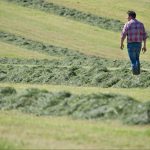